Design submitted by Clement from Singapore.

Clement says: I have been looking at watches with eink screens but i have not seen any pretty ones yet. Eink screens consume little power and should last long if used in a normal watch.(Current smartwatches have too many functions that consume power). Hence i’ll try my hand at designing a watch that suits my fancy. I also realized that ring-watches are quite cool but not many people wear them. 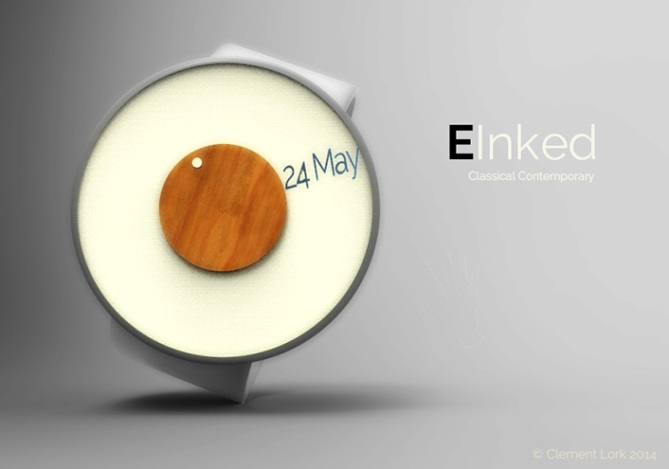 The design has a minimalistic watch face. Hours are told by the white dot on the wooden disc and minutes are told by the “string of words” on the eink display. The “string of words” could be anything that is programmed in the control unit, like date, seconds, temperature or even a stopwatch mode. Two buttons on the back of the watch helps to toggle between modes or set the time.

I think the rubber-strapped watch would appeal to fun loving people that would like a simple design. The metallic ring-watches are more for hipsters and probably lean towards the more feminine.

The way of telling time is not esoteric but rather based on our natural perception of the clockface. There are actually 2 models of the watch presented. One is the common wristwatch that looks clean and simple. The other is a ring watch that is fairly unique.