Anders says: I was on the tram about six months ago when I caught sight of a concrete buttress of some sort, which was shaped like a number of intersecting blocks. It was an interesting shape that I thought might make an interesting watch face, so I sketched out a few ideas. None of them worked, however, but I kept coming back to it. 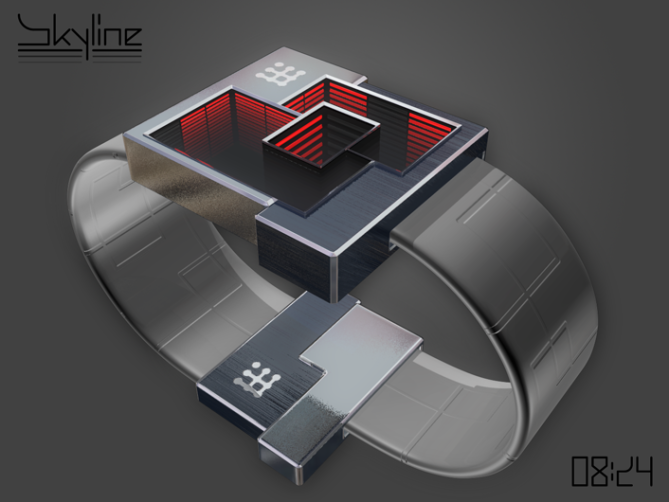 At some point during this process I remembered the infinity mirror and it struck me that it should work very well with this concept. Last week I had another go at trying out some shapes, and I finally managed to simplify it enough while still keeping the visual interest. It seemed to have an urban quality; as skyscrapers with their glowing rows of windows rising into the mist and blocks of houses partly obscuring each other, creating new shapes.

The display is a fairly straightforward 12-5-9 variant, with a separate display section for each group. The first of the hour segments is in the bottom right of that section, for the single minutes it’s in the top left, and for the 10s of minutes it’s at the top. To maximise the mirror effect the display is negative, that is, all segments are on except for the current one. The only tricky part is the 10s of minutes section, which only has 4 segments. Zero could be shown by no segments being lit but that would be boring, so I decided to show it with two segments off and two on. Five is shown with all segments on. This could of course be easily altered if some other option is preferable.

The mirror display does have one major drawback, which is that the effective viewing angle is quite narrow. I have tried to remedy this by letting the indicators protrude a little distance from the edge of the display, which is an improvement but not a complete solution. The ‘mirror tunnel’ tunnel effect could be altered by making the bottom mirrors slightly pyramid-shaped. If the display is used in ‘always on’-mode battery life might also be an issue, but re-chargeable batteries should sort that out.

Styling is restrained, with an 80’s flavour. The shapes are quite simple; intersecting blocks of varying size that hopefully create and interesting whole. Material options are many, both metal and plastic would work. Colour-changing LEDs would give almost endless variation to the display. 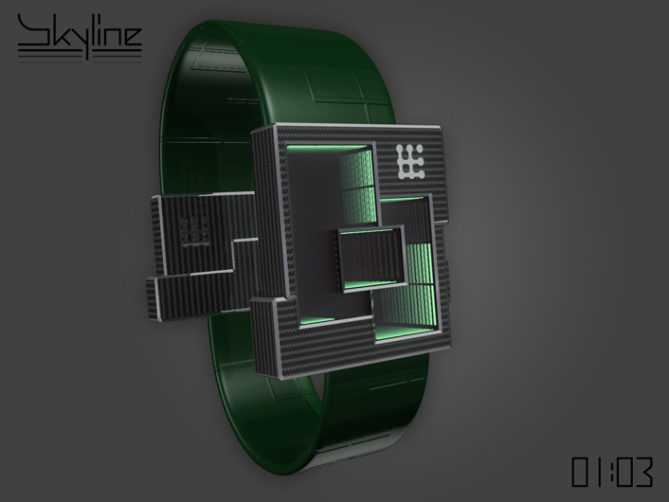 The strap is also simple; an embossed rubber/leather strap in two widths which are joined with a buckle that echoes the shape of the watch body, with a single release button replacing the display sections. Skyline should be fairly easy to manufacture as the elements of the mirror display essentially sits on top of a standard, flat LED display.

The target audience for this design would be urban, probably fairly young and with an eye for the elegant. People with a geometric bent should also get a kick out of it. Material options, colours and so on could steer the appeal toward the executive or the street end of the spectrum. 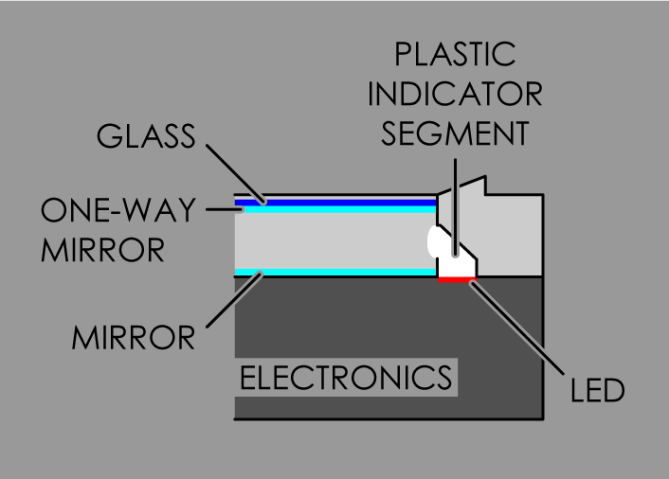 I’ve updated the display slightly, adding one segment to the single minutes and two to the tens of minutes. This way the symmetry of the latter is retained and both minute sections begin with a ‘0’ segment, the singles in the top left and the tens in the upper right. This means there are always one segment off for these sections. The hour section is unaffected but could be adjusted to also have a ‘0’ segment, showing hours 0-11.

As you can see from the images this update hardly changes the look of the design at all, and I hope the readers agree that it’s an improvement in readability. It’s almost embarrassing that I didn’t think of it in the first place, but I guess I was too busy ‘simplifying’. =)