Design submitted by Patrick from France.

Patrick says: Often my friends tell me that at Tokyoflash watches are very beautiful, but they are complicated to decipher. So for once (the exception proves the rule), I reflected on a watch very easy to read, so that as many can benefit from advanced technology and unique know-how of the team Tokyoflash.

The “Talking-Watch” analog has a function “speaking clock” programmable from a computer, with a selection of languages corresponding to your country.

Its recharge is done by USB cable connected to the computer. There is also a function MP3.

The “Talking-Watch” seduce most of us (man and woman), for its innovative design, very modern and its many functions.

First quality: The visually impaired will be seduced by this watch universal.

Second: Talking function is programmable in many ways, among other things, a birthday with personalization (example: “I love you Aiko” in the selected language and according to his repeated desire).

Third: The watch case is in line with the bracelet, which gives finesse and lightness. 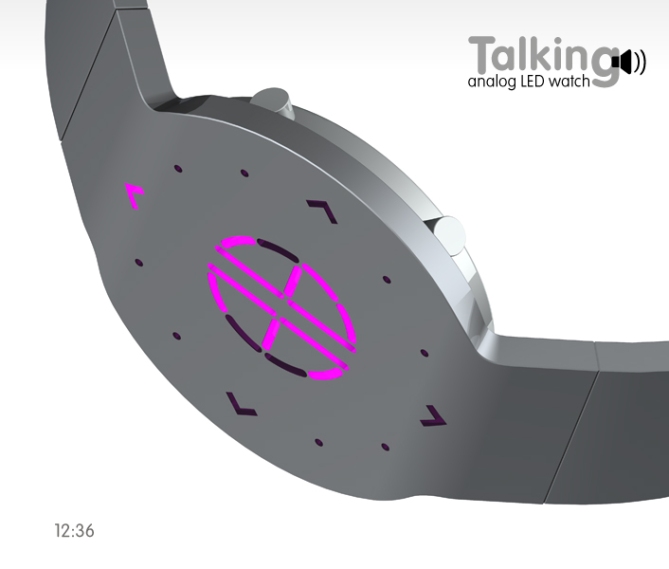 Personalized alarms will be available on the site of Tokyoflash while being recorded after the purchase of the “Talking-Watch”, fidélisant thus, the new purchasers.

The function in “speaking” mode (which can be deactivated) is programmable automatically, every 4/5 minutes or the every 1/2 hour or every hour, according to your desire…

To each time the hour arrives, the watch speaks and LEDs correspondents vibrate with a soft pulsation to indicate the programmed hour.

With each pressure of the corresponding button, the watch speaks and give you the hour of the moment.