I had the idea for the original analogue Tri-Hub a while back, the  basic premise being the time would be displayed via three cylinders mounted on a centre “Hub”. 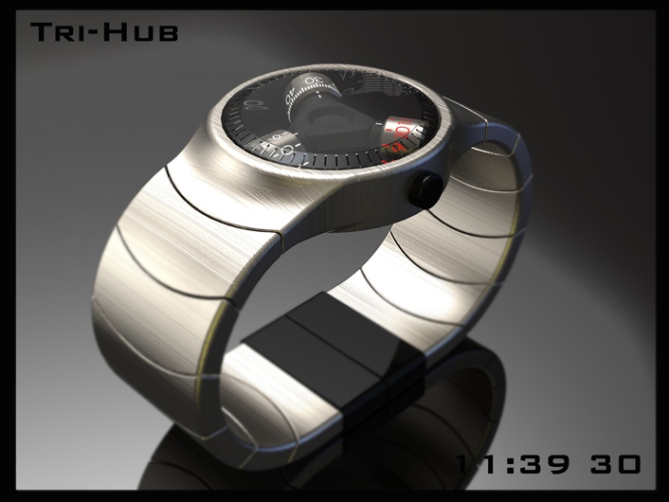 This layout give the watch an expensive and technical look. The Hybrid version is a more recent concept. I wanted to tell the time via an LCD but still using the “Hub” as the viewer.

The three cylinders on the analogue version rotate to tell the time. One cylinder tells the hours, another describes groups of ten minutes and the third displays the single minutes. The entire “Hub” assembly rotates to display seconds.

I figured that this is a complicated and therefor expensive design and decided to create the “Hybrid” version which is hopefully easy and cheaper to make.

The “Hybrid” version used three LED illuminated plastic tubes to acts as viewers for the LCD below. The viewers are connected to an analogue “hub” this rotates to display the minutes (this could be for the hours or seconds) The hours and seconds are displayed by the LCD and highlighted by the viewer (the LCD minutes can be turned on and off depending on preference)

This design has a gadgety technical feel that make appeal to people who like that type of product. The case is traditional in form so shouldn’t scare off the more traditionalists.

The time telling method and look sets this design from others. The analogue version gives the design an up-market feel. The hybrid version is more techie and may appeal to the more geekish amongst us. 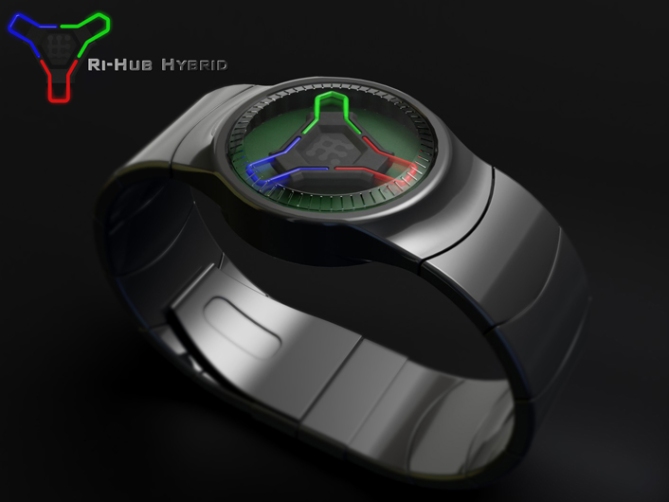