Anders says: What’s cooler than a hologram? Four holograms! That is basically the design ethos behind this concept; Wormhole.

Seriously though, the basic idea started as an observation that some people like to wear their watches on the inside of their wrists. It gave me the idea that it might be cool to separate the hours and minutes into two displays, so that they are on either side of the wrist.

Wormhole is actually a bog standard analog watch, or perhaps two. One display shows the hours and the other the minutes. Additionally, both displays shows the seconds to give a bit of movement and interest to the watch. When looking at the images it’s worth noting that the hour display is rotated 180 degrees relative to the minute display, in order to show the hours the right way up when the wearer flips his or her wrist.

I considered a few possible styles, but it wasn’t until I came up with the idea of some sort of portal from one display to the other that the design really gelled. Then I had the brainwave of using holograms for the hands and I knew I had to make something of it. The space theme came very naturally once I’d gotten that far.

After a few false starts I realized that the best option would be to make the hands as simple as possible, to let the 3D effect of the holograms really shine. But I also couldn’t resist making a fun, slightly gimmicky version; enter Toky the astronaut and her space shuttle. An umbilical cable runs from the shuttle through the wormhole and connects to the space suit. The astronaut’s right hand points to the current minute (the left one gives a thumbs-up), and the nose of the shuttle points to the current hour. 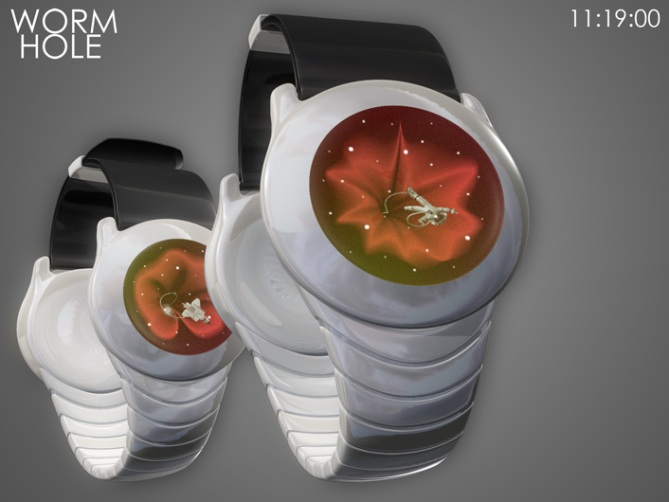 The seconds are the same in both versions; a nebula-like funnel that has an inward marker in the hour display, and an outward one in the minute display. The idea is that the second hand has already been sucked into the wormhole, and the nebula is some sort of energy signature. Or something. Another detail is that the domed glass over the displays dips in the middle, as though it’s being drawn into the gravity well.

The bottom of the display is littered with small white LEDs, for that starry night feel and to make the display more interesting than a flat black. 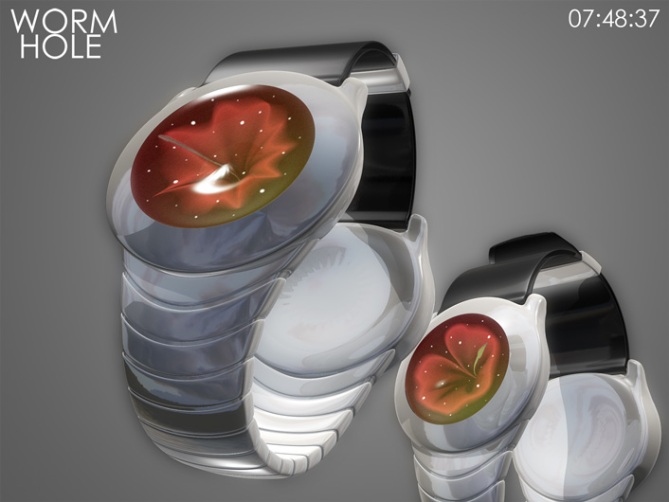 The one thing this design hinges on is the holograms, and that they are layered. I’m actually not sure if this is possible but I think I’ve seen pictures of holograms on transparent plastic somewhere. Assuming the manufacture and use of the holograms work, then the only things separating this from any old watch is the dual display, which might be connected through the link strap, or alternatively simply use two separate standard movements. The problem with that is of course that it would be tricky to set the displays to be in time with each other, but it shouldn’t be impossible to get around one way or another. Perhaps the unused hand on each display has an LED that only lights up when the watch is being set?

People who like fun and unusual watches should get a kick out of the slightly 60’s space look, hopefully the ones who find the simple hands too boring are charmed by the astronaut version and vice versa. The styling is a little bit unusual, but I’ve tried to keep it sober enough not to alienate those people who (like me) don’t want to stand out too much. At least not at first glance.