Peter says: I have an interest in retro style computer games, the old 8 bit type stuff that tended to consist of wire frames to describe 3D forms. I figured this would make a nice watch face.

I wanted to use this wire form 3D look to tell the time in a retro style.

The watch is basically a disc analogue  watch with a stealthy dark matte face, the face would be 3D with grooves or extruded shapes where the hands would be. The time would be just readable in normal light. When activated the watch would project a grid over the face to help describe the 3D shape of the discs and help highlight the time. The grid size and colour would be custiomisable by the wearer to suit their mood or outfit.

This style of display may also lend itself to a dense LCD which would be flat but give the same 3D look.

This watch has a retro futuristic look feel that may appeal to nerds and geeks who get nostalgic for early computer games and merchandise. It may also appeal to clubbers and people who tend to come out at night as that is when the light show would be at its best.

The grid theme may also attract Tron fans both new and old who fantasise about riding their light cycles around the grid.

The time telling method is very conventional but the means of describing it is unusual and helps the design stand out for that reason. 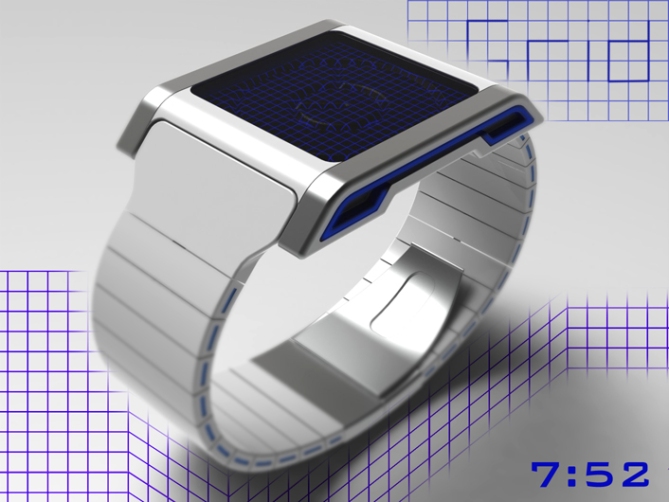